I wanted to document our saga of trying to get pregnant. I know we didn't struggle as long as some people have and still might be, but I do think it's important to share our story. Perhaps it can help someone, or maybe it will just be somewhat interesting to read. I am also documenting it for us, for when we try for another baby.

My path on birth control has been mixed. Without going into to many details I will say that I tried Depo-Provera (the shot) early in my birth control years, and it was terrible for me. I thought it was great, get a shot every 3 months, eventually your period will stop, easy! However, I didn't realize how much weight I would gain while doing it. There were a lot of factors that went into my weight, but Depo-Provera was definitely a strong contributor. I was disappointed that my doctor was not also paying attention to my weight gain, and perhaps pointing it, because really, when you are gaining weight you sometimes don't notice how crazy it has become until it's out of control. I eventually got off Depo-Provera and went on the pill. I know there are many different versions of the pill, and I was on a few throughout my time, I just don't want to list them all. Now it's time to get to the good stuff.

In January 2009 Joe and I decided to go off the pill. We knew we wanted to have a baby sometime in 2010, and we knew that sometimes it takes a while for a woman's body to adjust to not being on the pill and be ready to get pregnant. We also knew that it took my mom almost a year being off the pill before she got pregnant, so we thought we would be proactive and go off early. We weren't quite ready to get pregnant, we still had a few goals we wanted to meet, so we used other methods of prevention.
Things were going along fine until April 2009 when we went to Stake Conference (we are members of The Church of Jesus Christ of Latter-Day Saints). I remember sitting on the bleachers, (our Stake Conference was held at the Georgia Mountains Center, which is a convention center. The Gym area was set up with bleachers surrounding the main floor with chairs set up and then a stage in the corner.) and the bleachers gave a good advantage of seeing most of the people in attendance. As we were sitting there I remember seeing all these people with babies, or pregnant ladies, or even just young kids, and I had this overwhelming feeling that I was ready, I needed to have a baby! (not that it's unusual to see a lot of children at an LDS meeting like this one, but they were all standing out to me) Later that day I talked with Joe about it, and he felt similarly. So the pregnancy prevention stopped and we started getting excited! 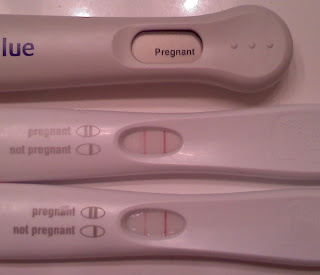 To sum up our experience over the almost 2 years of trying to conceive: it was worth it. We of course have had a happy answer to our struggles, and I know some people don't get that answer, but for us we knew that through it all we needed to stay calm and focused on our goal. We tried to not let the infertility get us down and depressed, and it would have been easy to let it consume our lives. Our relationship was strong when we were trying to conceive and it's even stronger now that we have been blessed with being pregnant. I knew that we needed to have doctors supporting us that we trusted and who knew what they were doing. I think the best thing we ever did was go to ACRM. I was confident that they would help us, either by getting pregnant naturally or through IUI or other methods.
We also had faith that we would be blessed, and that God had a plan for us, and we would get pregnant when the time was right for us.
I strongly recommend those couples that are currently struggling to get pregnant, find a team of doctors that they can trust, who will listen to your concerns and suggestions and give you appropriate advice. I think going to a fertility clinic is the best idea because the doctors there are specialists and they deal with people similar to you every day, unlike your typical OB/GYN.
I also suggest that couples not forget about each other during this time. It's easy to just focus on the infertility and forget about enjoying each other. During 2010 Joe and I decided to get an annual pass to Disney World. We had a few family visits that staggered from December 2009 to March 2010 and it made financial sense for us to get an annual pass. This gave us the opportunity to spend lots of time together, driving from Georgia to Florida, and then exploring the parks in different ways each time we went down. We also were lucky enough to have wonderful friends let us stay with them when we were down there. Even though we were struggling with infertility we were enjoying each other's company and strengthening our relationship.
If through all of this you still do not get pregnant, there are other options. I strongly believe in adoption. I know it's not for everyone, and you really have to be prepared for adoption, but I have seen adoption bless so many lives.
Try to stay positive. There will always be good days and bad days, but ultimately this experience will grow your relationship with your spouse.
Posted by Mrs. Grigg at 3/25/2011 02:42:00 PM